Hepasil DTX™ is a carefully formulated blend of antioxidants aimed at supporting and maintaining your body’s second largest organ: the liver.

The main ingredient is milk thistle extract—one of the most powerful currently known antioxidants. Milk thistle helps increase the amount and activity of several antioxidant enzymes involved in detoxification (including superoxide dismutase (SOD) and the glutathione peroxidase system).

Other important antioxidants in Hepasil DTX include alpha-lipoic acid, green tea extract, turmeric extract, and Olivol® patented olive-fruit extract. Each helps protect multiple enzyme systems in the liver, and provides secondary antioxidant protection to the rest of the body. 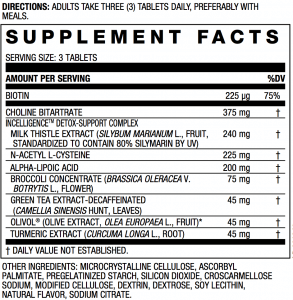 The Benefits of Hepasil DTX™ 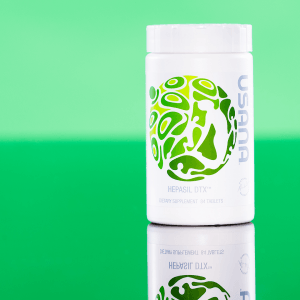 Your liver is vital to maintaining good health. Almost every nutrient you consume—food, drinks, medications, and supplements—goes through your liver. That’s where the nutrients are broken down into a form your body can use, or altered and eliminated from your system.*

Hepasil DTX is enhanced with USANA InCelligence Technology® to support healthy liver function in many ways. It supplies the body with nutrients that promote the natural detoxification process and endogenous antioxidant activity.*

The Anatomy and Physiology of the Liver

The liver is the major detoxifying organ in the body and the primary site of Phase I and Phase II detoxification enzymes. It’s located in the upper right area of the abdomen.

Your liver performs multiple functions important to keeping you alive and well. It helps convert nutrients from your diet into substances your body can use. The liver plays an important role in turning toxic substances in your body into harmless substances or expelling them.

These toxic substances go through the Phase I and Phase II detoxification process.

Phase I detoxification enzymes consist of the cytochrome P450 family of enzymes. These serve as the first line of defense, neutralizing most toxins. Unfortunately, this initial oxidation can occasionally make some compounds more toxic. Phase II detoxification enzymes can further modify the products of Phase I by chaining them to water-soluble molecules. Now they are less toxic and able to be passed from the body.

These detoxification pathways are aided by the antioxidant activity of vitamin C and glutathione—a powerful antioxidant enzyme made in your body.

Glutathione is the most abundant antioxidant in our bodies and plays a major role in the detoxification process. Unfortunately, glutathione is inefficiently absorbed from the diet and must be manufactured in the body by specific Phase II enzymes.

Vitamin C is an important first line of defense in protecting biomolecules from oxidative damage, especially in circulation. 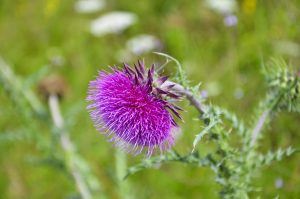 Milk thistle’s active ingredient, the one that supports the liver, is called silymarin. This is a chemical extract from milk thistle seeds. Silymarin is a strong antioxidant.

The Science Behind Hepasil DTX™

Choline is a key ingredient that helps the liver metabolize fats and cholesterol and move them out of the liver. Upon entry into the cell, choline is oxidized to become betaine, which donates methyl groups necessary for healthy detoxification reactions.

The liver uses biotin to support the metabolism of macronutrients and the synthesis of glycogen for energy. 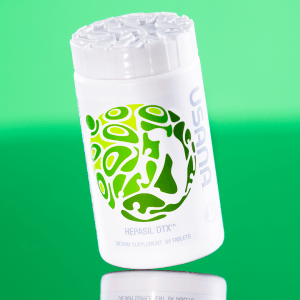 These powerful nutrients target a cell-signaling pathway that supports naturally protective processes within a healthy liver:

Taking three tablets of Hepasil DTX a day for 28 days can help significantly optimize natural glutathione production and overall antioxidant capacity. The formula is patent pending because of the increase in glutathione, vitamin C antioxidant capacity, and detoxification activity it helps produce within the body.*

USANA’s in-house scientists have conducted a double-blind controlled study to test the effectiveness of Hepasil DTX.

The study’s results showed that both circulating glutathione and vitamin C levels increased following treatments with Hepasil DTX. To our knowledge, this is the first time a combination of essential nutrients and phytochemicals have been shown to increase both plasma vitamin C and glutathione levels simultaneously. The results also showed that the recommended dosage of Hepasil DTX is able to boost both glutathione and vitamin C levels—essential molecules for antioxidant defense and to support the natural detoxification pathways and process.

To show the observed increases in glutathione and vitamin C translate into a clinical benefit, USANA scientists went on to determine the antioxidant capacity of each subject’s blood. They utilized the serum antioxidant reserve (SAR) assay developed by USANA Health Sciences to find that subjects that supplemented with Hepasil DTX were significantly more resistant to oxidative damage than subjects given the placebo.

This proprietary combination of essential nutrients and broccoli extract, milk thistle, and alpha-lipoic acid increases plasma vitamin C and glutathione levels simultaneously, and turns on the molecular machinery needed to utilize glutathione in the detoxification reactions. It also significantly increases the overall capacity of the blood to protect against oxidative insult.

Together, these results show that taking the recommended dose of Hepasil DTX increased antioxidant capacities and the body’s natural detoxification capacities by boosting glutathione and vitamin C levels.*

Hepasil DTX™ has two patents pending. The first is for the formula’s effectiveness. Another for safely combining previously incompatible, but equally important, nutrients into one bi-layer tablet using USANA’s Nutritional Hybrid Technology.

This technology enables USANA to manufacture a truly unique, comprehensive liver support supplement. And the InCelligence Detox-Support Complex unlocks the innate intelligence of your body’s natural processes to help support the longevity of your liver.*

Reposted from Ask The Scientist

When You’re Tired All Day, When You Snore All Night, Is It Sleep Apnea?

Cobra – How to be bigger than any challenge life gives you

Administrator - 09/17/2014 0
Health
Pools, waterparks, hot tubs/spas, splash pads, and water playgrounds are great places to have fun, be active, or just relax. Having fun while you swim...