Grapefruit juice and the actual grapefruit can be part of a healthy diet. Grapefruit has vitamin C and potassium—nutrients your body needs to work properly.

But it isn’t good for you when it affects the way your medicines work, especially if you have high blood pressure or arrhythmia (irregular or abnormal heart beat).

This food and drug interaction can be a concern, says Shiew Mei Huang, PhD, of the U.S. Food and Drug Administration. The FDA has required that some prescription and over-the-counter (OTC) drugs taken by mouth include warnings against drinking grapefruit juice or eating grapefruit while taking the drug, Huang says.

Here are examples of some types of drugs that grapefruit juice can cause problems with (interact):

Grapefruit juice does not affect all the drugs in the categories above. The severity of the interaction can be different depending on the person, the drug, and the amount of grapefruit juice you drink. Talk to your doctor, pharmacist or other health care provider and read any information provided with your prescription or OTC drug to find out:

How Grapefruit Juice Can Interfere With Medications

With most drugs that interact with grapefruit juice, “the juice lets more of the drug enter the blood,” Huang says. “When there is too much drug in the blood, you may have more side effects.”

For example, if you drink a lot of grapefruit juice while taking certain statin drugs to lower cholesterol, too much of the drug may stay in your body, increasing your risk for liver and muscle damage that can lead to kidney failure.

Many drugs are broken down (metabolized) with the help of a vital enzyme called CYP3A4 in the small intestine. Grapefruit juice can block the action of CYP3A4, so instead of being metabolized, more of the drug enters the blood and stays in the body longer. The result: too much drug in your body.

The amount of the CYP3A4 enzyme in the intestine varies from person to person, says Huang. Some people have a lot of enzymes and others just a little. So grapefruit juice may affect people differently even when they take the same drug.

Although scientists have known for several decades that grapefruit juice can cause too much of certain drugs in the body, Huang says more recent studies have found that the juice has the opposite effect on a few other drugs.

“Grapefruit juice can cause less fexofenadine to enter the blood,” decreasing how well the drug works, Huang says. Fexofenadine (brand name Allegra) is available as both prescription and OTC to relieve symptoms of seasonal allergies. Fexofenadine may also not work as well if taken with orange or apple juice, so the drug label states “do not take with fruit juices.”

Why this opposite effect? Instead of changing metabolism, grapefruit juice can affect proteins in the body known as drug transporters, which help move a drug into our cells for absorption. As a result, less of the drug enters the blood and the drug may not work as well, Huang says. 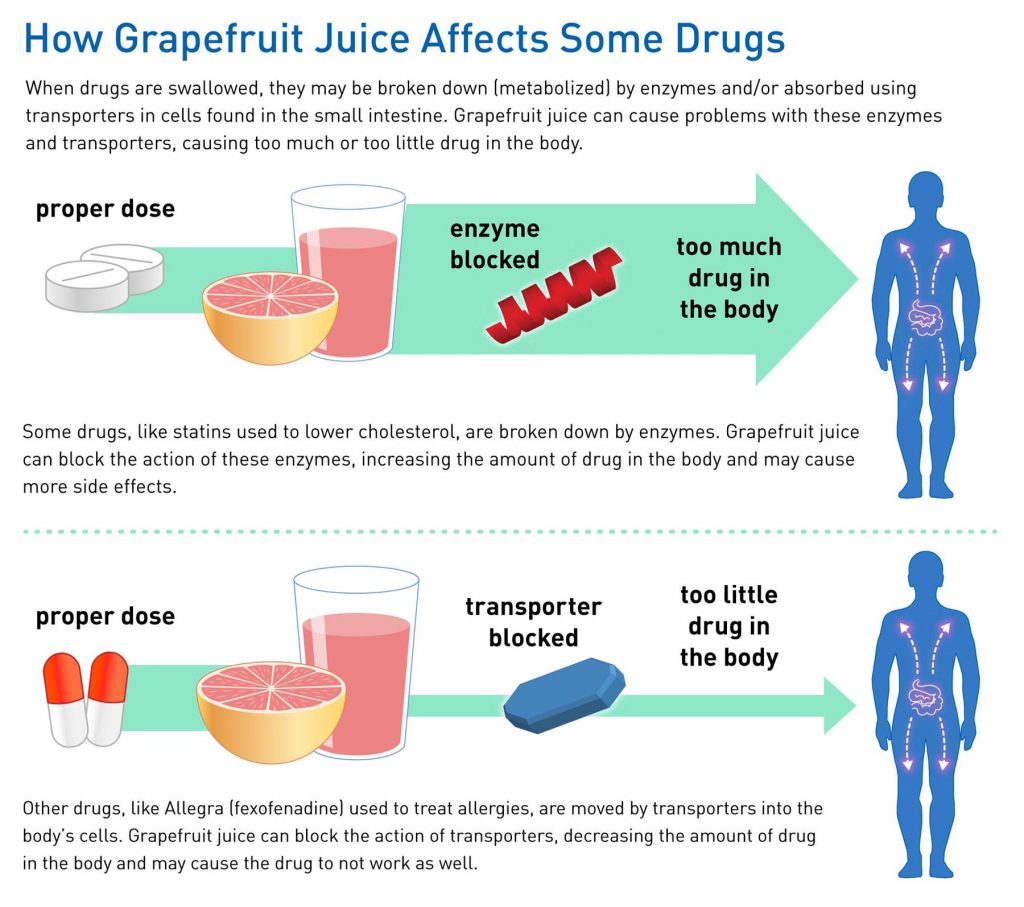 Find Out if You Should Avoid Grapefruit or Other Juices

This article appears on the FDA’s Consumer Updates page, which features the latest on all FDA-regulated products.