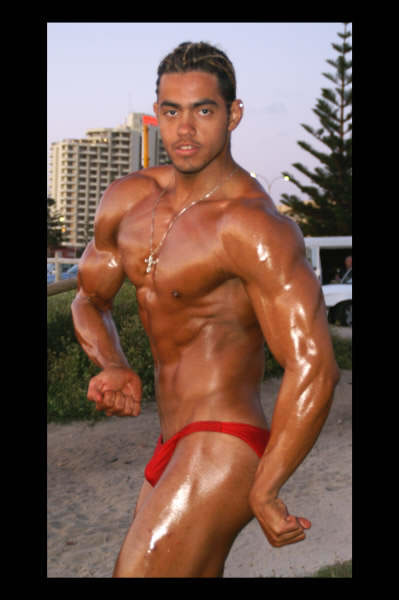 Gary Ruiz is a 21 yo Filipino, born and raised in Australia. Started competing in 2007 and placed 3rd in his first competition in the NABBA Junior’s Category. In the same year he won the Junior category at NABBA last September. To follow on another victory in October in the junior IFBB state titles in WA Australia. Jay Cutler came to Perth after the Olympia’s where he was able to have a pose down at his seminar. Because of this they gave him the prize of training with Jay Cutler the next day and was featured in the December issue of Muscle mag 2007. Gary also competed in The Muscle Wars 2008 in Singapore.

What is your height & weight?

What are your parent’s names and where are they from?

His father is Mr. Angelo Ruiz from Malaga, Spain and his mother is Mrs. Luz Ruiz from Calumpit, Bulacan, Phillippines

Do you have any brothers or sisters?

Older brother is named Lester. He met Manny Pacquiao and trained with Buboy Fernandez. He wants to be a boxer and has his first amateur fight coming up in March 2008!

How did you get started in bodybuilding?

I was just a really skinny kid and used to get teased about being so skinny. I always get into fights in school, then one day I decided to hit the weights starting with a pair of dumbells my father had made and trained in my room. Eventually i needed heavier weights and more equipment so i started training at the local university gym. I then would read bodybuilding mags and books on how to get big and it wasn’t till i started watching films like ronnie coleman and pumping iron. Then I decided I wanted to see what it would be like to compete, to go through the off season and pre-contest dieting. I then started competing in 2007 and ever since just loved getting on stage and competing.

What are your goals in bodybuilding?

Currently I would want to win the Juniors title and go from there.

Where do you see yourself 10 years from now?

Hard to say, we’ll see where bodybuilding takes us

Do you play any other sports?

Boxing What was your first bodybuilding competition and when?

What’s your philosophy on training?

Where do you train?

Murdoch University, Gallery 4, Pure fitness, Warehouse, I know people there so Ii train at different gyms but my main gym is Murdoch.

What do you do for supplementation?

Usually I take Creatine and Glutamine and my backup is a mass gainer. Currently I am using Joe Weider 1000, but only as an insurance policy. I’d rather get my carbohydrates and protein, etc. from whole foods.

What do you think about the drug situation in bodybuilding?

At the end of the day like Jay Cutler said, people don’t want to see classic normal physiques on stage they want to see big freaks, so there will always be drugs in the sport i think it should be banned but it never will because no one will want to watch the sport, people want to see freaks. Even natural contests are no longer natural. Gone are the days of natural athletes, people will always find ways around geting past the drug tests nowadays too.

Pre-contest it consist of 7 meals a day varying from 12 egg whites, oats, tuna, chicken, steak and potatoe or brown rice. In the off season i eat pretty much 6 meals a day with a lot more carbohydrates and a bit of junk food every now and then, but in moderation.

Did anyone inspire you to become a bodybuilder?

Arnold Schwarzenegger. He was just so wise and smart, and where he got with the sport deserves the outmost respect, coming from where he came from.

Who is your favorite bodybuilder?

Definately Arnold Schwarzenegger. But I also like Kevin Levrone for his discipline and intensity in the gym. It’s just something else.

What don’t you like about the sport and how would you change it?

What are your best & worst qualities as a person?

Best quality I’ve been told is the way I’m able to change my mind set and have mental focus and an unwilling determination to do whatever it takes to get what i want to get. That is also my worst quality because I should learn to relax sometimes and stop being so serious and strict.

What is the most important thing in your life?

What is the lowest point of your life?

Probably in high school having to deal with all the racism and all the fighting as it was a daily thing. Having to stand up for myself no matter how big or how many others their were, as no one else would help. I was always on my own in those situations. Also having to deal with all the negative comments of my father at the time, if your father is telling you your nothing you start to believe your nothing. You really feel like giving up on life. 2001 is definitely the lowest point in my life.

Any messages to young bodybuilders?

Train heavy, be consistent, and always believe you can be the best.

I’d like to thank Big Lui, he’s the 2004 Mr. World and 2006 Mr. Australia. He has helped me out alot with my bodybuilding training and especially the diet. Also Brad Mcmillan for his help and support. My friends and family who’s been there to support me and be there for me, they know who they are.

Where To Start with and More

3 Tips from Someone With Experience

Where To Start with and More