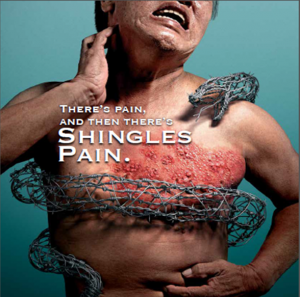 What is Shingles / Herpes Zoster?

It is important to note that inflammation and atrophy within the ganglion occurs prior to rash onset and irreparable damage is usually associated with postherpetic neuralgia. From the ganglion, the virus then is transported down the sensory nerve, producing intense neuritis, and is released from nerve endings in the skin, where the virus erupts in a restricted dermatomal distribution characteristic of herpes zoster.1,2

Reactivation of latent VZV may occur throughout life. Episodes of reactivation may remain subclinical and asymptomatic until host immunity declines to a level that is insufficient to maintain subclinical latency of VZV.

Both chickenpox and shingles are caused by the same virus, the varicella zoster virus (VZV). After a person has had chickenpox, the virus rests in the body’s nerves permanently. Approximately 30% of all people who have been infected with chickenpox will later develop herpes zoster, commonly known as zoster or shingles.

Why do some people develop shingles and others don’t?

Shingles occurs when VZV reactivates and causes recurrent disease. It is not well understood why this happens in some people and not others. The risk of getting shingles increases as a person gets older. People who have medical conditions that keep the immune system from working properly, or people who receive immunosuppressive drugs are also at greater risk to get shingles.

What are the symptoms of shingles?

Before the rash develops, there is often pain, itching, or tingling in the area where the rash will develop. Other symptoms of shingles can include fever, head¬ache, chills, and upset stomach.

What are possible complications from shingles?

Very rarely, shingles can lead to pneumonia, hearing problems, blindness, scarring, brain inflammation (encephalitis), or death.
For about one person in five, severe pain can con¬tinue even after the rash clears up, a situation called post-herpetic neuralgia (PHN). As people get older, they are more likely to develop PHN, and it is more likely to be severe and long lasting. The pain may be sharp or throbbing, and it may extend beyond the area of the original rash. The skin may be unusually sensitive to touch and to changes in temperature. PHN can last for months, or even years.

Is there a treatment for shingles?

Several antiviral medicines can be used to treat shingles. These medications should be started as soon as possible after the rash appears. They can help shorten the length and severity of the episode. Antiviral treatment is most effective if administered within 24 to 72 hours of the appearance of the rash. Pain medicine may also help with pain caused by shingles.

Is there a test for shingles?

Yes. Shingles is usually diagnosed based on symp¬toms and the appearance of the rash. Definite diag-nosis is made by growing the varicella virus from a skin lesion.

Can you catch shingles from an infected person?

No, shingles cannot be passed from one person to another such as through sneezing, coughing, or ca-sual contact. While it is possible for the VZV virus to be spread from a person with active shingles to a person who has never had chickenpox or never been vaccinated against chickenpox (if they have direct contact with the rash), the person exposed would develop chickenpox, not shingles.