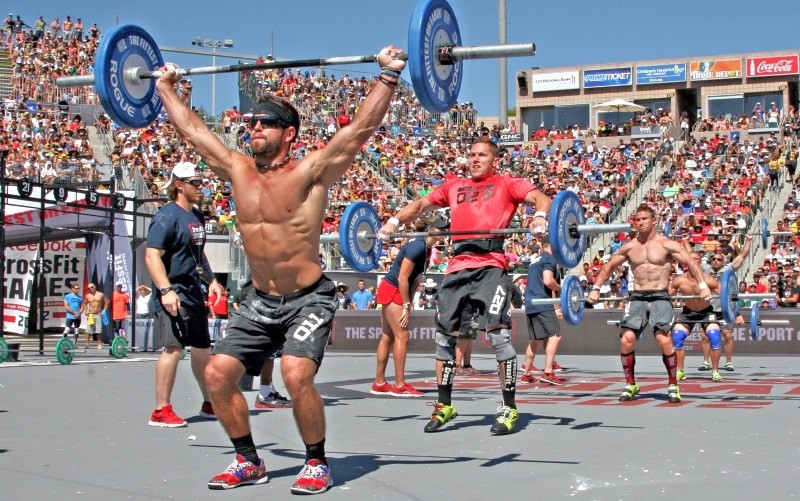 While most CrossFitters follow a low carb Paleo diet, Rich is not Paleo. “A lot of people who do CrossFit eat a strict Paleo diet, but I don’t subscribe to any specific way of eating,” Froning told Outside. “I’m not Paleo at all.”

However, Froning eats a lot of bacon (which Paleos love). He eats about about a pound or two of bacon a week. When asked by a Twitter fan whether he follows a low-carb diet, Froning merely replied that he “tries to eat cleanish.” However, he drinks a lot of whole milk and protein shakes throughout the day.

I don’t have much of a diet. I eat a lot of peanut butter and drink a lot of whole milk. And protein shakes are my thing. At night, I will eat whatever I want, but through the day, I don’t really eat that much.”

Works Out Two to Five Times a Day

Unlike other elite athletes, the 5-foot-9 Froning, who weighs a solid 195 pounds, doesn’t take rest days, preferring to stay active every single day. “I don’t really take days off from training,” he said. “For ‘active recovery,’ I’ll go ride my mountain bike for a couple hours once a week.”

Rich told TheBoxMag his daily workout schedule includes waking up at 7:15 and reading the bible. At 8:15 a.m., he warms up on the Airdyne to get loose, then does his first WOD (Workout of the Day). He then does big lifts, like squats or dead lifts. At 11:45 a.m., Froning completes a second WOD that includes the lift that was just practiced. At 3 p.m., Froning practices Olympic lifts and then does another WOD.

Rich usually works out with friends, saying the camaraderie and competitive aspect of group workouts makes it more fun. Froning, who admits he hates running, said he usually runs with friends to make it more tolerable.

“I make people do it with me, so I’m not suffering by myself,” he said. “And that helps me, because the competitive aspect comes out. I’m like, ‘I don’t want to get beat,’ even though it sucks.”

No Steroids: ‘I Work My Butt Off’

Froning, who was crowned the “Fittest Man on Earth” for the fourth time at the 2014 CrossFit Games in July, also insists he’s 100 percent natural and does not take steroids. He bristles at the suggestion that he takes steroids or other performance-enhancing drugs.

“I don’t take them,” he said. “I work my butt off. And I think people who accuse other people of using, they could be jealous, or just lazy. They can’t imagine doing the work that it takes. We’re also tested regularly too. People say, ‘Oh, you can fake a test easily,’ but I don’t know how to do it, so it can’t be that easy.”

In addition to his physical gifts, what makes Froning so dominant in his sport is his incredible willpower and determination. He said being mentally strong is critical to success. He said you should never place a limit on what you can do, because we are all capable of pushing ourselves beyond our perceived limits.

“I don’t think well see a plateau or a limit,” he said. “Your body’s an amazing machine and it’s created to do stuff. See what you can get out of it.”

Despite his meteoric rise to fame and his incredible success (Froning recently signed a lucrative long-term contract with Reebok, sponsor of the CrossFit Games), Rich said his Christian faith and family keep him centered and humble.

“My gift from God has been my talent, my genetics, and the people around me,” he said. “And that motivates me if I’m struggling — being able to show [my wife and daughter] what I can do.”

The Ultimate Guide to

Getting To The Point –

Questions About You Must Know the Answers To

10 Things You Need to Know About Kettlebells Part 2